Your dogs sense of smell is 1000 times more sensitive than yours, and there are some very good reasons for this.

While we know that dogs have an average of 220 million olfactory receptors, we only have 5 million.

In fact, the Army Research and Development Center ran a study in 1985 that a dog’s sense of smell is superior to ours, to cats’ and to most wild animals, including coyotes, red foxes and coyotes.

Dogs are being used by the armed services to sniff out explosives and mines, because they are very reliable.

The study also concluded that a dog’s sense of smell is more effective at detecting mines, booby traps and explosives than any mechanical or electronic device, including robots.

Perhaps even more fascinating is the fact that dogs can foretell earthquakes or tidal waves before we know they are going to happen.

And a dog can predict epileptic seizures or a diabetic coma in a person.

One theory is that your dog can smell electrical signals from either the atmosphere or a person before such an event.

While we really don’t know how dogs can do all this, we do recognize that they have a very sophisticated sense of smell.

So how does your dog’s nose work? First of all, it’s a bit different from yours. Your dog has mobile nostrils, which simply means that they can actually move to determine the direction of a scent or smell.

She can also “sniff” and sift through all the different odors and determine which are important to her and which ones are not.

While you process the world around you with your eyes, ears and touch, a dog primarily uses his sense of smell.

Exactly What is Scent?

Tiny molecules are what make up scent. Different scents have different size molecules and they have codes which are specific for the thing that is emitting the scent.

Of course we cannot see the scent codes, but they are dispersed or scattered in a manner that can be compared to fog, steam or smoke.

However, dispersal of these molecules can be changed by wind, temperature or humidity. Knowing this gives us some clues about using our dogs when hunting.

Two types of scent trails are left by a moving animal. The first, diaminobutane, is a trail left by disturbed vegetation or brush. Paws or feet leave a scent trail as does the vegetation that was brushed by the animal’s body as it passed and touched things.

The other type of scent is called diaminopentane and it actually comes from the animal’s body and is shaped in a kind of scent cone.

Diaminobutane, the first type, actually gets stronger after a short time, when bacteria have started to gather on the scent particles. 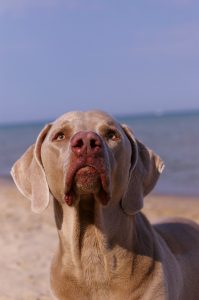 Your dog’s nose is far more sensitive than yours!

Knowing about the two types of scent is important because different breed dogs hunt differently. Old timers describe hunting dogs as those who “drift” a track and those that “straddle” a track. These two styles look different from each other in the field.

Dogs who drift a track are usually faster runners and they hold their heads up while sniffing a trail. Track drifters cut and slash along a scent trail, and it looks like they are running back and forth along the scent trail. An example of this is a bird dog who runs with his head up in the air while searching for scent.

Dogs who straddle a track follow a trail, one step at a time. They are slower and have their heads to the ground while tracking a scent.

To confuse matters, many hounds use both types of scent when they are tracking game. And things get really complicated when a scent trail is contaminated by the smell of an animal or person who has crossed the scent trail.

In addition, training and experience can actually improve your dog’s scent tracking, whether she has a great gene pool or and a moderately good one.  Working your dog in all kinds of weather and conditions will help him be a better hunter!


There may be links in the post above that are “affiliate links.” This means if you click on the link and purchase the item, I will receive an affiliate commission, which does not affect the price you pay for the product. Regardless, I only recommend products or services I use personally and believe will add value to my readers.

Didn't find what you were looking for? Try searching for it below.

Get your FREE mini-course on Weimaraners…

Puppy Diarrhea: 4 Most Common Causes and How to Treat It

Weimaraner Dog Teething: Why Your Puppy is Chewing Everything in Sight

Puppy Vomiting: When it is Serious and What to Do about It

Your Dog Ate Chocolate - Should You Panic?

Osteoarthritis in Dogs: Does Your Weimaraner have Symptoms?

Cataracts in Dogs: Could Your Weimaraner be going Blind Due to Cataracts?